Home » Philly Injury Blog » 7 Reasons To Ride In An Ambulance

7 Reasons To Ride In An Ambulance

Should You Ride In An Ambulance After An Accident?

7 Reasons To Ride In An Ambulance

There are times when emergency transport after a crash is the best option. While an ambulance ride isn’t always necessary, here are 7 reasons to ride in an ambulance after a car crash:

2 Reasons Not To Ride In An Ambulance

It’s not always necessary to go to the hospital after a car crash. Here are 2 reasons why you might not need to ride in an ambulance:

Talk To An Injury Attorney

If you’re injured in a car crash and need emergency transport, you should talk to an injury attorney. In Pennsylvania and New Jersey, you can call Kane & Silverman for a free consultation.

Reasons To Ride In An Ambulance

In a serious car crash, it can save your life. EMTs have skills in providing emergency care until you arrive at the hospital.

If you are unconscious, emergency technicians are normally required to take to to the hospital. This is “implied consent.” Emergency responders will assume you want treatment and transport you to the hospital.

Hit Your Head During The Crash

If at any point in a car crash you hit your head, you should not drive yourself to the hospital. Many times, people with head injuries suffer serious complications.

If you experience any memory problems after a crash, you should take an ambulance to the hospital. Memory issues are usually a sign of more serious problems, like a mild traumatic brain injury.

Broken bones don’t always require emergency transport. But, you will need emergency care to fix the break or fracture. If you have a broken bone, you should not drive yourself.

If You Are Bleeding

Obviously, small cuts and scrapes aren’t a big emergency. But, if you’re bleeding after a crash you should ride in an ambulance.

Reasons Not To Ride In An Ambulance

Sometimes, people witness a car accident and call for emergency services. Often, an ambulance will show up as a precaution. But, if you aren’t injured you don’t need to ride in an ambulance.

Do Not Need Emergency Care

If you don’t need emergency care, you have the right to refuse to ride in an ambulance.

Should You Ride in an Ambulance After an Accident?

Being involved in an accident can be devastating. Should you ride in an ambulance after an accident? We don’t advise anyone to turn down urgent medical care. But, we understand paying for medical care is a real concern for most people. If in doubt, get emergency medical care and figure out how to pay for it later.

The cost of riding in an emergency ride to the hospital is different for each provider. People can expect to pay anywhere from $300 to $2,000 or more. An emergency ambulance ride can cost around $2,000. For those who do not have insurance, or use an out-of-network service, the cost could be even higher.

Emergency transport to the hospital is not cheap by any means. Sometimes, ambulance operators don’t participate with health insurance. One Philadelphia man reported a seven-mile ambulance ride cost him over $1,600. But in an emergency, you won’t get to pick which provider comes to the scene.

How To Pay For An Ambulance Ride

Paying for medical bills is a serious concern for most people. After an injury, bills can pile up fast. Sometimes, your car insurance will cover your medical expenses. Similarly, you can file a claim against the at-fault driver’s insurance to pay your bills.

After a serious injury, you should talk to an injury attorney. A personal injury attorney may be able to help. Discuss your situation in a free consultation with an attorney.

Compensation After A Car Crash

If you need emergency transport after a car accident, you may have a legal claim. A personal injury attorney can negotiate the best possible settlement for your claim. If needed, an attorney can sue the at-fault driver to get you the money you deserve.

Personal injury lawyers specialize in helping people get the money they need. Call us today at 215-232-1000 to discuss the nature of your claim.

Kane & Silverman helps injured people. Call us for a free consultation. You don’t pay us anything unless we recover money for you. We have offices in Philadelphia, PA and Marlton, NJ. 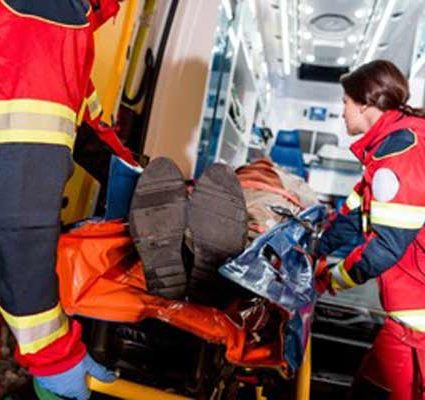