Cars In The Bicycle Lane

Cities and towns have tried to improve bicycle safety. They have built bicycle lanes to help protect cyclists from drivers. Bicycle lanes were created to prevent cyclist injuries. However, when a car parks in the bicycle lane and the bicyclist is injured, what can be done?

Any vehicle in the bicycle lane is creating a hazard for bicyclists. Illegally parked vehicles create bicycle lane obstructions and can lead to injury, or even death. Bicycles are not equipped to protect their riders from an accident, let alone with a vehicle.

If a bicyclist is injured by a moving or parked car in the bicycle lane, liability may fall on the owner of the vehicle. In certain situations, the driver does not need to be present in the vehicle to bear responsibility to the injured bicyclist.

As a bicyclist in Pennsylvania, you may have a valid injury claim against a driver obstructing the bicycle lane. The Pennsylvania Supreme Court ruled how a vehicle is parked also falls under the umbrella of operation of the vehicle.

Before August 21, 2021, if the driver was not physically driving the vehicle at the time of the accident with a bicyclist, they would not be held responsible. A recent wrongful death claim was successful in holding a negligent city entity responsible. This ruling helps Pennsylvania bicyclists injured by bad drivers – even those that park badly.

Government Is Not Always Immune

If the vehicle is a public/government vehicle, the agency or government responsible for the vehicle may be held liable. The Pennsylvania Supreme Court ruling involved an illegally parked city vehicle. A driver hit the illegally parked vehicle and pushed it into a contractor working on the side of the road. The contractor died as a result. This was a catastrophic loss for the family.

How This Ruling Applies To Other Claims

If a bicyclist swerves into traffic to avoid the parked car and crashes or is hit by a moving vehicle, they may have a valid claim for injuries. The owner/operator of the illegally-parked car could be held at least partially responsible. This can give an injured bicyclist more money toward the value of their claim.

What To Do In A Bicycle Crash

If you were injured on a bicycle due to a car being illegally parked, immediately report the incident (if you are able). Call the police and file a police report. Take pictures and gather information from any eyewitnesses. The Bicycle Coalition of Greater Philadelphia has a guide on its website to help bicyclists in the event of a crash. The Coalition also has a resource for reporting dangerous street conditions, like dangerous potholes or blocked bicycle lanes.

Talk To A Bicycle Injury Lawyer

If you are injured as a bicyclist, you may have a valid injury claim. Bicycle lanes are intended to provide safer bike rides. We want to help punish bad drivers that hurt bicyclists. Talk to a local injury attorney in a free consultation to discover your options.

At Kane & Silverman, our consultations are free. You don’t pay us anything unless we recover money for you. Our attorneys work hard to get injured people the money they deserve. Contact us today for a free legal consultation. 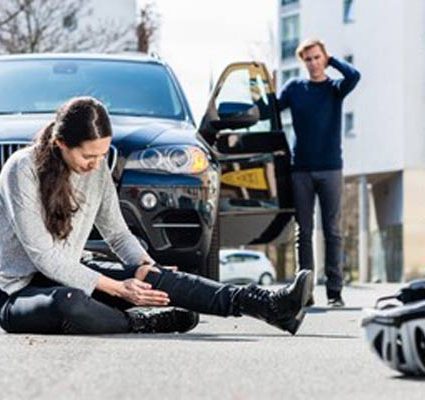