Dangers of a Football-related Head Injury

Josh Nava, a high school football player in California, suffered a serious football-related head injury while making a tackle during a game. Nava remained on the ground for a few moments after the tackle before standing up and wobbling to the sideline. Nava then collapsed and was rushed to the hospital where he underwent emergency surgery to reduce pressure and swelling to his brain. He was put into a medically induced coma to help improve his condition. According to his team’s Facebook page, Nava is still in a coma but is now breathing on his own.

At the time of the injury, Nava, along with his teammates, was wearing a helmet equipped with Riddell’s InSite Impact Response System. This system monitors the severity and frequency of hits and works by using sensory pads inside the helmet to detect impacts. Coaches on the sideline are alerted when a hard impact is detected.

However, the sensor in Nava’s helmet did not go off after the hit. Riddell, in a statement to ABC News, said they are hopeful Nava makes a full recovery and “since few facts are known, it would be inappropriate for us to speculate on the circumstances surrounding the incident.”

Risk of Injury to Football Players 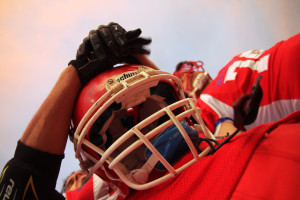 New technology combined with safer tackling techniques seeks to decrease the risk of injury to football players. However, just this year, seven high school football players have died as a result of football-related injuries. Countless more have been injured and have suffered from concussions or traumatic brain injury.

We continue to learn more about how to make the game safer for players of all ages. But we are also discovering more long-term negative effects that football-related injuries have on both current and former players. In fact, a recent study found brain disease in many former football players who played in either high school, college, or the NFL.

Football-related head injuries can be life-changing. The pain and suffering caused by these injuries reduces one’s quality of life and leads to increased medical bills. Lawsuits brought on by injured football players have become more common in recent years, including one accusing the NFL of hiding the dangers of concussions. No one deserves to be hurt or kept in the dark about the dangers of playing a game they love. If you or anyone you know has been the victim of a football-related head injury, you may be entitled to compensation. Contact a traumatic brain injury attorney at Kane & Silverman for a free evaluation of your claim.