Oct 18-24 2015 is National Teen Driver Safety Week.  This year’s theme “Avoid the Regret, Avoid Impaired Driving” aims to raise awareness of the dangers of impaired driving. The Teen Driver’s Source at the Children’s Hospital of Philadelphia (CHOP) states that “impaired driving not only includes alcohol or drug use, but also being distracted, tired, or strongly emotional.”

According to the Center for Disease Control and Prevention, the first month of driving after getting a license is the most dangerous. Teens ages 16-19 are more likely to be in a motor vehicle crash than any other age group and six teens ages 16-19 die from injuries sustained in motor vehicle crashes every day. Talking to your teen about the dangers of driving and keeping an open line of communication may help save a life.

The Association Between Parenting Style and Teen Driving Behaviors

It is crucial for parents to be aware of their child’s whereabouts in a supportive way. Researchers at CHOP found that teens with parents who were supportive and set rules in a helpful way were half as likely to be in a crash and were 71 percent less likely to drive intoxicated compared to teens with less involved parents. Teens with supportive parents who set rules were also more likely to wear a seatbelt and less likely to speed or use a cell phone while driving. Whether you have teenage children yourself or have a younger sibling who is a teen, talking to a teen about impaired and distracted driving in a supportive way can help him or her make safer decisions. The U.S. Department of Transportation’s National Highway Transportation Safety Administration (NHTSA) recommends five topics on teen driver safety to talk to your teen about. 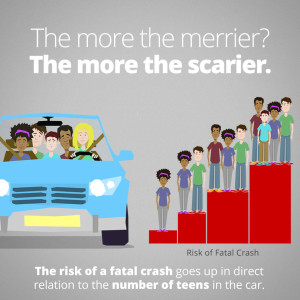 Be a Positive Role Model

In addition to talking to your teen about these topics, follow the rules yourself (excluding the no extra passengers rule). If your child sees you driving without a seatbelt or texting while driving, he or she may think it’s okay to do so also. If you are out drinking alcohol, use a designated driver or take a cab or Uber home to show your teen that you are making safe decisions.