An Appellate Court ruling has officially rejected the Ongoing Storm Rule defense. This is not a valid defense for landowners to avoid premises liability lawsuits in New Jersey. In fact, this supposed “rule” is not actually part of New Jersey law.

A man was injured in a parking lot during a storm. The storm was considered a “drizzling sleet.” Mr. Pareja fell on ice while crossing the parking lot driveway. However, the property owner made no effort to treat the icy condition. The owner of the property moved for dismissal due to the Ongoing Storm Rule. The case was dismissed by a New Jersey judge.

But, Mr. Pareja’s attorney filed an appeal to the decision. On appeal, the court ruled that a jury should hear the evidence. The Summary Judgment excusing the landowner’s liability during a storm was reversed. The court also ruled the Ongoing Storm Rule is not, and has never, been a law in New Jersey. Additionally, the Ongoing Storm Rule is not a defense for summary dismissal in New Jersey.

The Appellate Court released a statement suggesting a “bright-line rule” wipes out landowners from using reason to remove snow and ice from their properties. Some situations are reasonable to safely clean the area if the storm is not hazardous.

A Jury Will Decide

This decision isn’t a complete win. A jury will decide who is liable and if the landowners could have made a reasonable effort to remove the snow/ice. The Appellate Court is pushing for landowners to clean the area if possible when there is a foreseeable hazard.

Fall Injury During A Snowstorm

Property liability laws provide guidelines for the jury to consider. They are as follows:

People injured on someone else’s property may have a personal injury case. This kind of injury falls under premises liability law. In these cases, there is usually insurance to pay for injury expenses.

Talk to an injury lawyer in New Jersey. Regardless of the extent of the injury, a personal injury attorney might be able to help you. A New Jersey slip-and-fall attorney can determine if you have a claim.

At Kane & Silverman, we always provide free consultations. Call us for a free legal consultation. If you can’t come to us, we can visit you at home or in the hospital. Our attorneys are also available for video chat consultations. 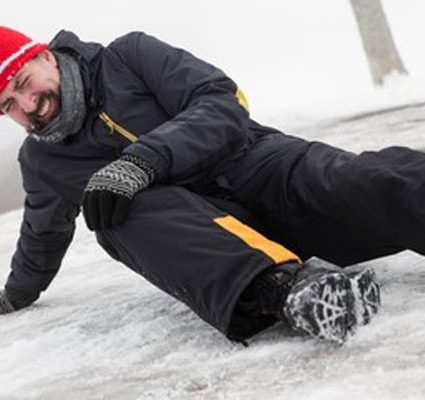